In Defense of Todd’s Shirt 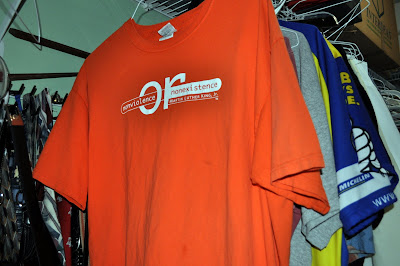 (In honor of MLK Day, I’m re-posting this. I hope you enjoy the day!)

Do you like the shirt?
Apparently some people don’t.
Todd bought it in Atlanta a couple years ago when our church youth group took an afternoon off from their mission work and toured The King Center, learning more about the work of Martin Luther King.
In case the words are too tiny for your peepers, it says “nonviolence or nonexistence.”

Todd wore it last Sunday when he was out with Sam, and he hadn’t given the shirt a single thought until a dad on the baseball field noticed it and grunted loudly in disgust.
“You better be glad we’re not nonviolent in America,” he said. “Or else our country wouldn’t be where it is today.”

“He said WHAT?” I asked Todd from the kitchen as he put his glove in the closet.
“Yeah, it kinda surprised me too,” Todd said. “Then he muttered something about bravery and gratitude.”
“BRAVERY AND GRATITUDE?” I said a little too loudly, storming into the bedroom with my butcher knife.
Sam stuck his head in. “What’s wrong?” he said.
“Nothing,” Todd said. “Go get your shower.”
“Did you say anything back? Like maybe YOU SPENT FOUR YEARS OF YOUR LIFE AS AN AIR FORCE OFFICER and what service did he ever do?”
“Why is Mom mad?” Sam said.
“She’s not mad,” Todd said, “Go on and get in the shower.”
Then Ben came in and wanted help with a calculus problem and everybody left me standing there, holding the knife, dripping chicken juice on my bare feet, steaming.

I could just imagine the scene. The guy read the shirt and smacked a label on Todd’s forehead.
Liberal.
Maybe even Communist or Socialist. Who knows. Labels seem to fly fast and furious these days.

I gritted my teeth and flew into an argument with the man in my head.
By the time Todd and I finally got a moment to return to our conversation, I had a whole list of things to whack this guy over the head with in my defense of nonviolence. (And yes, I see the irony.)
Things like:

Why don’t you ask what this shirt is about before you start fussing at my husband?
Do you think he’s making an anti-war stance? What if he was? Maybe someone who actually served might have something to say about that.
Ask about Todd’s brother’s service in both gulf wars, in Afghanistan, in Bosnia. Todd’s dad’s service in the army. My granddad’s service that cost his life in WWII. They were all willing and glad to serve. So was Todd. Violence is sometimes necessary, but service members know the price better than anybody else.
Maybe that’s part of why Todd wears the shirt. Why he’s such a believer in the words of Martin Luther King.
And how is it braver to use violence, anyway? Does non-violence not require bravery? Maybe even more bravery?

When Todd walked back in the room, I was still living our previous conversation.
“So what did you say? Surely you said something!”
“Yes, I said something,” he said. “You ought to put that knife away.”
“Tell me what you said first.”
“I just looked at him and I said that I got the shirt at the King Center down in Atlanta. I said, ‘You ought to go down there and tour it. It’s a great place to take your kids and it’s only a couple hours’ drive.’ I told him you can see King’s grave and learn more about his life and what he gave to our country. Then the guy wandered off and didn’t say anything else.”

Todd left the room and I sat down on the bed, trying to keep my mouth from falling open.
There I’d been, waving my knife around, ready to fight, while he practiced what the shirt preached. No slamming doors, no smacking labels on people’s foreheads, no accusing the guy of meaning anything in particular. Just a nonviolent response, inviting the guy into his circle instead of standing in the middle of it, throwing barbs his way.

I do love my husband. I love that he’s always willing to widen the circle.

And I love Martin Luther King, another circle-widener. He certainly wasn’t a perfect man (there was only One of those) but he used his life in service to others and in motivating the rest of us to do the same.

Enjoy two of my favorite quotes of his about nonviolence:
Nonviolence is a powerful and just weapon. which cuts without wounding and ennobles the man who wields it. It is a sword that heals.

Nonviolence means avoiding not only external physical violence but also internal violence of spirit. You not only refuse to shoot a man, but you refuse to hate him.