The Day This Mama Lost Her Cool 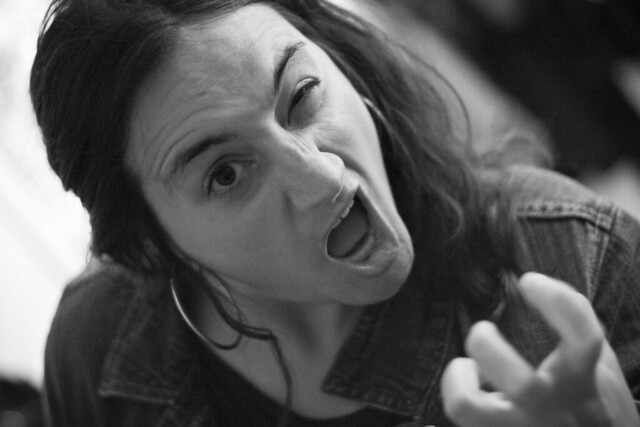 I like to think that I’m a pretty patient mama. Or maybe after launching two grown children into the world (yes, I know one is still in my basement) I’m too worn down and tired to put up much of a fuss about anything. So why was my eighteen year old son standing in front of me with his arms folded, wrinkling his forehead at me and saying, “Mom, stop, please. Your cursing is making me uncomfortable.”

See, we’re right in the college application season. This, put together with the election season and the season of my life in which I wake several times a night and need either Jesus or Harry Potter to keep me company until my brain winds down, means I’m kind of living on the edge these days.  You do not want to be the person who finds and eats the hidden chocolate bar with almonds and orange which I keep in my sock drawer for emergencies. No, you do not want to be that person.

Anyway, for seven days I watched Sam stare at a blank computer screen. He’d filled out all the paperwork. All he had left was the essay.

“It doesn’t have to be long,” I said reassuringly. “And it’s not a culmination of your entire life experience, Sam. Don’t make this harder than it is. They just want to know who you are and what you’re passionate about.”

Then he went back to staring at the screen. He listened to music, had a snack, and stared more at the blank screen. For hours.

“AAAAAAAAHHHHHH!” I’d mime-yell at my husband so Sam wouldn’t hear and fuss about nagging when he should be writing his essay. “Why won’t he write anything?”

Another week went by. “I’m happy to help,” I said cheerfully, patting him on the shoulder. “What if I interviewed you? Maybe that could jump-start your ideas.”

A third week went by. I could tell by his pacing and Sam’s artful avoidance of me and any college talk that his stress was mounting too. We were both volcanoes, rumbling and smoking as we moved around the house.

This was ridiculous. It was time to erupt.

This is when the cursing occurred, though in my defense I did not raise my voice and was only quoting Anne Lamott. “I know what you’re doing, Sam, because I used to do it myself. I still do sometimes. I sit there, frozen, waiting for the right words, the perfect thing I want to say to come out of my mouth or out of my pen or onto the computer screen, and it never does. AND IT NEVER WILL!

“That’s what I said. IT NEVER WILL! That’s why you have to rely on sh*%#y first drafts!”

“No, it’s a thing! It’s the only way. Ask Anne Lamott- one of my favorite writers who’s written tons of books so she ought to know. She wrote a whole chapter about it in Bird By Bird and do you know what the chapter was called?”

“Sam, you’ve got to stop thinking, stop waiting on things to be perfect. You’ve got to write the  sh*%# down. Write the sh*%# down and then you’ll  have something to work with!”

“Okay, okay!” Sam said. “But stop, please. This is weird. Your cursing is making me uncomfortable.”

So I sat beside him and helped him take baby steps into the sh*&#.

“I KNOW! ISN’T IT GREAT! YOU’RE WRITING IT DOWN, EVEN IF IT STINKS! THAT’S GREAT!”

So he wrote it down and then went back and crossed things out and wrote some more. He rearranged and tried different things and a few hours later, glory, glory halleluiah, thank  you, Jesus, HE HAD WRITTEN AN ESSAY! He had created an essay from the dung pile. He looked at it and I looked at it and we said it was good. Amen.

So ever since my foray into mild profanity, I have been thinking about this experience, how hard that was for Sam and how hard it has been for me in my life, the way we demand perfection from ourselves and how that strangles us and limits us and keeps us from growing and sharing ourselves, our thoughts, who we are.

So yay for the sh”&# pile! And thanks, Anne Lamott!