Passion at the Grocery Store

“Did you find everything you needed?” the lady at the cash register asked me with a smile. I told her that I did and asked her whether it had been a very busy afternoon. “Not yet, but that’s okay. Busy or slow it’s all great to me.”

I giggled a little, thinking she was being sarcastic and that I should laugh along. “Oh I’m serious,” she said, typing in the code for my yellow squash. “This is a the best job ever. It’s steady and comfortable. I don’t mind standing. I get to meet all kinds of nice people, sometimes I get good recipe ideas, and- bonus! – I don’t ever have to make a side trip to the store!” We laughed and then she asked if the Bertolli frozen tomato Florentine soup was as good as it looked on the package.

By the time we waved goodbye, she had told me that she was getting married for the second time that very next weekend and that the caterer had just cancelled on her and her sister was pulling her hair out, trying to help her get everything together. “She’s determined to be beside herself, but I keep telling her not to worry, that it will all work out. After all, if worst comes to worst, I know exactly where to find the frozen appetizers!”

I wheeled my cart out the door feeling better than when I came in.

It’s contagious, isn’t it, when people enjoy what they do?

There’s a store nearby that we go to whenever we’re having computer problems. My husband loves those people because they speak his language. They’re passionate about what they do and you can sense it the minute you step inside. The last time I went with Todd, a clerk saw him carrying in some sort of computer thing (can you tell how much I care about how it operates?) and walked right up to him and said, “What seek ye, traveler?”

Todd then made a comment about Locutus of Borg and the two of them kept at it, having themselves a little nerd party right there in front of me, then going on and on and on about the computer part he’d brought and all its problems that I didn’t care to understand. But I’m glad the clerk cared. I’m glad he found his calling and his people. 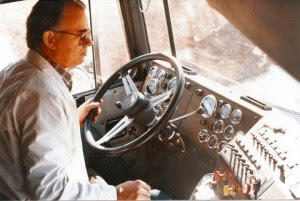 Todd’s dad is retired now, but he worked many years moving families across the country. Whenever Todd reminisces about the hot, tough summers he helped out, Kerry says, “That’s why they call it WORK, son.” But I’ve noticed how Kerry’s face changes as he leafs through stacks of photos he took from his days on the road, the cornfields in Kansas, the hills of San Francisco, the skyscrapers of New York City. He loved his work. He still likes to take long drives through the mountains or up the east coast, hardly ever stopping to get out.

You’ve probably heard what my literary boyfriend, Frederick Buechner, says about work, “The place God calls you to is the place where your deep gladness and the world’s deep hunger meet.”

Gladness and hunger meet up in some fascinating places. Even Lady Mary of Downton Abbey had to comment on it last night, “People do such odd things now days. I once met a man who spent his time importing guinea pigs from Peru!”

And what about my friend, Doug Berky? Do you know Doug? 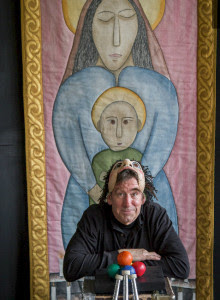 You should. He is an amazing artist and storyteller and spends his work helping his audiences think deeply and encounter wisdom in sacred stories. He shared three stories at our church recently when he was in town on a Wednesday night. My favorite is The Clown of God. 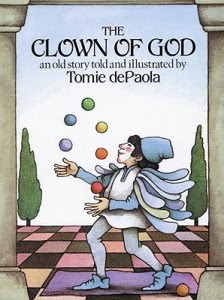 Do you know it? I had read Tomie dePaola’s book of the same name and knew it would be wonderful. It was even better even than I had expected.

It’s a legend about a homeless orphan boy named Giovanni who makes his way through life by juggling for crowds. He joins a troupe of traveling players and goes across Italy, entertaining people. They love to watch him, to see the joy of his work. In dePaola’s book, Giovanni eventually meets Franciscan brothers who explain that when one gives happiness to people, one gives glory to God as well. “If you say so,” Giovanni says, with a laugh.

Years later, when Giovanni has grown old, the crowds have tired of him, and he has given up his life’s work, he finds himself penniless on Christmas Eve, waking to hear music in a church. He is overcome by the beauty and the procession of gifts to the Christ Child; if only he had something to give! The crowds go away, and alone, he juggles before the Madonna and child statue, giving them his most beautiful, perfect, final performance. A priest finds him collapsed on the floor. But something strange has happened to the stern Christ child. 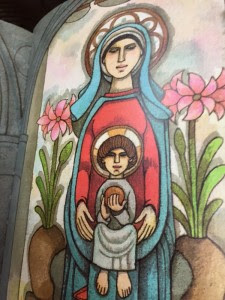 He smiles and holds the golden ball in his hand.

I wish each of you heart-work that gives you (and Christ!) happiness.